Color and Light in Architecture

Title: Color and Light in Architecture and its Effects on Spirits of Space Users in a Psychological View
Reza Babakhani: Journal of Architectural Engineering Technology
Get this article in PDF format

side in the spaces for a long time and exposed to different radiated energies of color and regular radiation of the colors make longer effects on sprit of space users and it has longer durability. In current world situation, in which psychological and spiritual problems arise in different layers of society, most of the problems are the result of the environmental effects, and this is the environment, causing intellectual deviation of people, home and city considered as environment in which city is composed of mass of homes. Conditioning relax and pleasant environment provided at homes and individuals in the home live together peacefully, the city and society approach relaxation, however, color and light considered as factors cause relaxation and/or stress, which bear strong and deep effect due to endurance. One shall provide a relax and happy environment through correcting interior decoration and using the light and natural colors as well as their effects. In this study, we move toward an environment in which at first color and lighting composed of organic/natural components, colors and lights directed toward natural colors, second, lighting and color of public places shall increase social communications and we prioritize using colors leading spiritual and psychological relaxation. Meanwhile, we shall remind appropriate use of artificial lights, since most of people are not aware of artificial light`s side-effect, neither know their disadvantageous aspects. All researchers know that whatever exists in nature is useful and considering man-made things, although there are useful aspect, its considered as an artificial one and its use bears side-effect, since its an artificial and non-natural thing, and all non-natural things bear environmental side-effect, including spiritual and psychological one, etc. One shall consider side-effects of artificial spectrum and lights in current life of human being, and use them with caution.
Keywords
Color; Light; Architecture; Spirit; Psychology
Introduction
Human life affected by different environmental and ultraenvironmental factors, impressiveness of human being from the environment considered as one of effective and persistent factors, i.e. architectural environment, the most effects of architectural space through color and light is obvious on human being.
Using light is widespread in urban architecture and design, thus studying their effects on human being and animals is an inevitable issue, which is in the event of environment protection and sustainable architecture, consequently the effects of color and light on human being is studied .
Methodology
Many books, papers and journals used which are published in the field, in an experiment for six months lighting change and rooms color change are studied to investigate their effects on the individuals` communications and spirits.
Finding
For six months incandescent lamp used instead of fluorescent lamp in personal house and the house lighting decreased to sufficient amount, so that radiated light of the spaces was complaint to proposed standards in while people and things are visible, only incandescent lamp used, finally following table achieved which is the result of six months to study the effects of the way of lighting and adjusting light and its effects on individuals who enter the space (Table 1).
Table 1: Monthly effects of light and color in a space on individuals.
According to table above, maximum hours that people could bear in the space is a colored compound with white wall and yellow natural light in which individuals had intimate and warm relationship together, and some issues proposed considering family and individual relationships.
Since many years ago light and color in interior architecture and urban design`s architecture have been familiarized, the longer coexistence effected space users` spirits and their social communications,
In this sense, research indicate that design and planning for appropriate use of color and light increases efficiency, and provide proper and safe communication between space users, in spite of its crucially, neglected in recent years in residential houses only for economical saving of incandescent lamp costs, which forms family basis and first human society and the most important one forms bigger community i.e. society while they were close to natural and warm spectrum and classified as lights with good quality but macro lamp economically and false pattern for useless and extra indoor lighting with fluorescent lamps and energy-efficient lamps, causes failure in eye sight and skin complications, etc. in addition to not using suitable lamps, including lampshades, causing both interior creative architecture and different spiritual space in space users which is useful in efficient consumption, but they will be forgotten gradually while high consumption pattern emerges to our lives.
Another aspect considering color and lighting is culture destruction and removing ancient architecture, including colored glasses and colored doors as well as colorful carpets which have been used significantly in houses in the past, and affected the residents` spirits positively while they were obvious.
Unfortunately, during past years, particularly interior architecture such as color and light, their long-term deep effects on spirit of space users will be forgotten. While neglecting the fact that color and light`s life will remain in our minds for a long time, and such durability during time pass affects spirits significantly, and they are effective on space characteristics, spirits and user communications with together, thus one shall consider color seriously and control its effects practically and psychologically, since its approved that color has particular effects on human life, and the research can used in space color and lighting (Figure 1).

2-Glass and carpet colorful components in interior ancient architecture
In this research, we study a main problem of modern architecture`s life i.e. weak relationship of family members in modern houses and the role of color and light to increase or decrease the problems.
Scientifically, individual complementary colors spectrum are sum of the remaining colors in a colorful aggregation of colors which are not visible, eye is different from ear, since eye can hear different sounds but eye can`t recognize colors separated from each other, and reply color components separately, since colors are components of different light spectrum, for better recognition of colors, one can say that color is the result of light wave and light is a particular material of electromagnetic energy, and human eyes can recognize 400-700 mili-microns wavelength only, now, one can specify color place in life cycle by determining wavelength and frequency of colors (Figure 2). 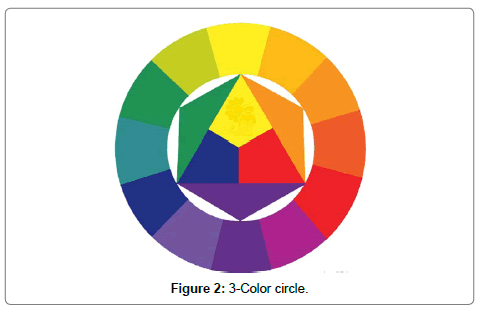 3-Color circle
Light waves are not colored by themselves, since color appeared in human eyes and mind, its not clear that how we recognize the wavelengths, the only thing that we know is that some colors appeared because of qualitative differences in sensitivity to light.
Using lights in space of interior and exterior architecture has a long story. In many cases it is the result of different color components with others causing significant effects on individuals` spirit, today color and light is used for physical and spiritual disorders and reforming the criminals which are proven scientifically and their treatment/reform and their effects have been studied many times .
How color and light may have such deep effects? Its worth to mention that light by itself is not such effective, but expresses itself in combination with its color, to the other word this is color that has its effects and applications on psychological and architectural field, and the effects are sometimes the effects are immediate and sometimes in future .
According to the research accomplished by psychologists, in many cases the effects originated from color are future based and during the time, with less intermediate effects. When an architectural space is designed and accomplished, its color combinations appear during the years and will affect behavioral and attitudinal system and human life of the environment Considering interior design, thing`s color and environment should be considered significantly. i.e. if one puts red glass and green glass together in front of an electrical light, its seen in black and dark, since red glass bears all spectrum radiation except red range and green glass bears all lights except green one, consequently no color remains and the result is a black color as well as other colors gained through attraction called subtractive colors.
Things` color has subtractive feature, a red container seems red due to attraction of red lights while reflecting red color, and eye with mind gain particular recognition through contrast and see the thing in particular color, however, considering color combination darkness and brightness degree of a chromatic color can be measured by gray, white and/or using one/more achromatic .
Color recognition is a psychological-physiological fact different from physical-chemical feature. Physiologist, O Elderhing, argues that when watching moderate/neutral gray in which there is an equal observing material due to observing and re-production as a result observing material is fixed, to the other word moderate gray creates a completely balanced status in the eyes.
Rick indicated that eye and mind require moderate/neutral gray which is unrest if it lacks. One can utilize color features to know human mind and its recognition by color and it1s effects.
For example, color Foam is first color-related feature that humans recognize easily and recognize it easier than the other aspects, color Foam is a color-feature which is classified as visible colors between different wavelengths .
To the other word, red, green, blue are foams which are reported in a particular color, its said that human eyes can recognize 150 different foams, but this time all is distributed in a visible spectrum since our eyes have more ability in a linger waves. There are three aspects that cause our eyes recognize colors: light source, thing, and receiver eye, in fact the factors create a visual message in the mind and finally things` color and environment appears by mind process.
Subtractive Color
For color recognition and its psychological effects on human being, one shall study the colors one by one, since nature of colors overshadows the environment and spaces and leaves deep effect on human moods through radiation endurance in the environment, as one can say that.
Nature of indicator color is analyzable and recognizable that involves human eye and mind physically and chemically, in this way, colors will be meaningful, any color has particular psychological characteristics for human being, to the other word, they have particular psychological and spiritual effect on human mind and environment, color recognition is a psychological-physiological fact causing particular chemical and physical effect.
Such features in colors changes mind temperature of observer, for example exposing to green, blue, purple and other types in this spectrum, a cool and cheer feeling happens in an observer, in contrast, exposing to colors such as yellow, orange, red transfers warmness and heat to observer and provides activity and stimulation.
Cold colors creates active lull, isolation, and warm colors have stimulator and activity and happiness, for example, blue color is symbol of gratification form relaxation status and enjoying it, soft, light blue with hopeful status, so that human being is placed in affected by supernatural powers. However, green color becomes yellow while keeping moderate characteristics, and moves deeper by adding blue, green is accompanied with science and faith effects.
Purple is a mix of blue and red, a common feature from both of them, this is a luxurious and ceremonial one. A dark mix is energetic and luxurious and lighter and softer spectrum, purple is a mysterious color and considered as creativity symbol, the color considered as cold red both physically and spiritually. Following table is an example of highly used colors and their effects presented psychologically which is the result of experiments and researches in color psychology domain and their effects on human being in a long term and colors concept are visible in the table (Figure 3). 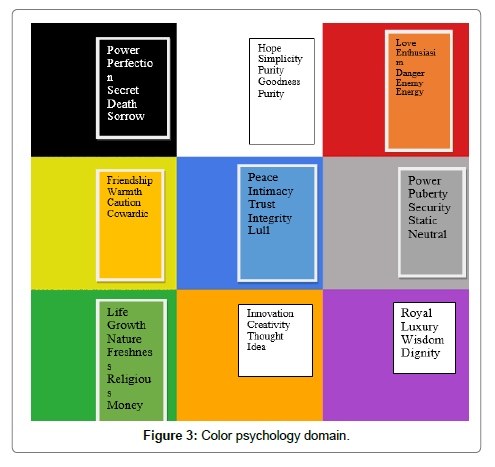